What were the most influential albums I listened to growing up? Which ones made an indelible impression on me? Which would I recommend to others as “musts” from days-gone-by? My personal top ten, in no particular order–

It was the summer of 1976. I was nine. And you’d find me out in our backyard, running around in red, white and blue shorts and t-shirt, clearing make-believe hurdles and throwing makeshift javelins and shot-puts, emulating the hero of the Summer Games, Bruce Jenner.

Then the whole world changed. And I’m not talking about Bruce becoming Caitlyn.

I’m talking about the first time I laid eyes on Boston’s debut album, simply titled Boston. That artwork–do you remember it? For 1976, it was far out. A fire breathing guitar spaceship. You knew from looking at the cover … this wasn’t Mom and Dad’s Roger Whitaker record! 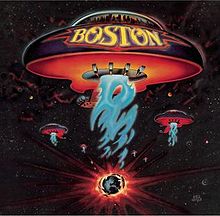 Then … that sound! If you experienced it in 1976, you remember that unique distortion sound Tom Scholz crafted. To this point, the world hadn’t heard anything like it.

The album opened with More Than A Feeling. And you knew immediately it was more than a feeling–this was special. The acoustic open to the electric melody … and then the harmony solos. Mind blowing.

And Brad Delp’s voice. To this day, forty-plus years on, that voice is still perhaps the best I’ve ever heard in rock-n-roll. So distinct. Peace of Mind followed. Another amazing tune. No drop off.

By this point, I’d flipped the album cover over. Do you know the very first thought that crossed my mind? No lie–I saw the dude in the middle with the big afro, Sib. I immediately thought, ‘That dude is the drummer.’ And of course, I was right. That’s what a 70s rock-n-roll drummer should look like, right?

Then you flipped the vinyl. Side two was every bit as amazing as side one. There isn’t a let-down song on the record. Boston was the first album I remember playing all the way, first song to last. It was almost like you had to play them in order–they unfolded into each other.

Honestly, looking back, Boston ended my fascination with Bruce Jenner and the decathlon. I traded in my pretend javelins and shot-puts for air-guitar and drums. I wanted an afro like Sib.

Here’s the cool thing to me, looking back. Although the eighties brought more unique guitar sounds and guitar greats, there’s still never been a sound quite like it. Admit it, if you know rock-n-roll, you can pick Tom Scholz’s guitar sound out anywhere.

Never heard this album before? A great pair of noise-cancelling headphones are a must. This one will spin your head around.