If you’re just dropping by, you’ve stumbled upon a series of posts–the ten most influential albums in my life (in no particular order). As a writer, I’ve realized music has played a pretty key role in my appreciation of storytelling and wordsmithing. Of course I’ve also dug this trip down memory lane, remembering the songs, the bands, and the many memories connected with listening to these records.

Nothing better to do? Take a trip down memory lane with me: Chicago, Boston, Elton John, Seals and Crofts, and Petra thus far.

Think back. There are moments in every life where one thing, one encounter, one occasion alters your course so significantly you’d say it was ‘life-changing.’ This record … was all that for me.

It was 1976. I lived in Central Florida. There were two popular stations on local radio. Every kid–as far as I knew–faced a choice: Do you grow up listening to pop station BJ-105 or rock-n-roll’s Rock-100? Think of it like this: Village People or Led Zeppelin? BeeGees or Thin Lizzy? KC and the Sunshine Band or Bruce Springsteen and the E Street Band?

At the moment I became aware of this most important choice–would I pop or would I rock?–my own personal album collection included (don’t snicker at me, dude!) Neil Sedaka, John Denver and … yes, some Village People and BeeGees records. I was perilously close to breaking the pop direction! Then … this happened. 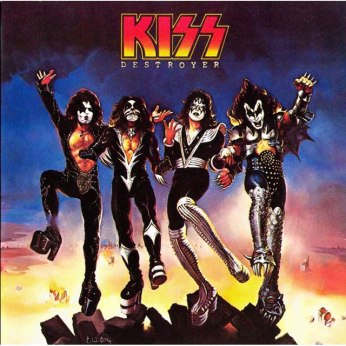 The facepaint. The outfits. The shoes. The music. The stories. What the heck was this?!?!

“And that guy right there,” my friend Bobby said, pointing at the demon-looking guy on the right, “he spits blood!” Well, at eight years old, faced with a choice–dudes who dress like construction workers and cops and cowboys and Indians and sing about all the fun you can have at a YMCA versus a leathered up band, boots with teeth, demon-painted creatures who spit fire and blood and sing God of Thunder … game changer.

KISS saved me from a lifetime of pop music. Can you imagine if I’d grown up listening to Madonna instead of the Boss? Egads!

(By way of full confession, I am finding a it a lot of fun to listen to throwback seventies and eighties radio these days, and do smile often to hear some of that old pop music too. What an era! Anyhow …)

Story and influence on the storyteller in me, that’s why I’m posting these musings–

The album started with Detroit Rock City. Story of a wild life ending in a flaming car-crash, complete with sound effects. Captured my young imagination. Taught me, too. Watch your speed, kiddos! Don’t drink and drive, kiddos! Shout It Out Loud was a rebellion anthem. Flaming Youth were the kids leading the rebellion–and I wanted to be one of them. (May have joined the KISS Army Fan Club after hearing these tunes.) And of course, who could resist the painful love story cat-faced drummer Peter Criss pined … Beth?

Beth, I hear you calling
But I can’t come home right now
Me and the boys are playing
And we just can’t find the sound
Just a few more hours
And I’ll be right home to you
I think I hear them calling
Oh Beth, what can I do?
Beth, what can I do?

One other memory concerning KISS. There came a day when, as a brand new Jesus Freak, some guy at church told me KISS was “secular music” and “God doesn’t approve.” He suggested I trash my KISS records. To punctuate his point he added, “I’ve heard KISS stands for ‘Knights in Satan’s Service'” and that blood-spitting guy is a Satanist.”

The rest-of-the-story: KISS was all the rage for me between the ages of say nine and twelve. By my teen years–and the discovery of girls–KISS sort of fell off my radar, replaced by Journey, Foreigner and Def Leppard on Rock 100. I’m just so very grateful it wasn’t  Devo and the B-52s on BJ-105.